Please use my artwork as a spring board for inspiration only and do not copy for submissions or magazines. Make your artwork your own. Thank you.

Again, I apologize I haven't posted in FOREVER! I am a full time caregiver so free time is at a bare minimum these days. However, I do try and squeeze a little fun time in here and there. I will always be a crafty gal, no matter what. Gives me time to relax and just plain forget all the hustle and bustle of everyday life. A couple weeks ago I received a complimentary copy of the spring 2017 issue of The Stampers Sampler. My friend Lynne Moncrieff tipped me off as she noticed on the Stampington website that a card had my name on it (thanks Lynne!) Right after she e-mailed me, I had to run out to the latest Barnes & Noble to try and sneek a peak. If you get a chance, you can get a lookie on pg. 89. It really surprised me as I made the card quite awhile ago. Needless to say I am thrilled they liked it enough to publish it as The Stampers Sampler is my ultimate favorite magazine. Hope everyone is doing well and had a great Easter. Maybe I will post again sometime in the near future. Miracles do happen, right? LOL!
Posted by Debbie K. at 4:50 PM No comments:

I know it's been FOREVER since I last posted. Family obligations keep me extremely busy. I apologize for that. It's not that I don't want to blog, I just don't have the time. Every once in awhile however I do get to sit in my art room and create something to submit to a magazine. To my delight, I had a decorated bag published in the Oct/Nov/Dec. 2014 issue of 'The Stampers Sampler' using their angel tempting template. My artwork is on pg. 96 so if you find yourself wandering in a Barnes & Noble bookstore, JoAnn's or Hobby Lobby, you can take a peek at it. Thanks for stopping by. Hope life is treating everyone well! Enjoy the rest of the weekend:)
Posted by Debbie K. at 6:32 PM 4 comments:

I am sooooo sorry I haven't posted in ages. Family illness has gotten in the way (including me currently having a bad cold/sinus problem). Also, blogger has not been cooperating with me when I try attaching photos to my postings! Not sure what's going on there....grrrh. Outside of all that, spring can't come soon enough and even our dog is getting restless! Today however, a little ray of sunshine entered my corner of the world when I noticed that the box that I created (and posted in my last blog post) and sent to Eileen Hull is with her at CHA!!! I've always been super interested in CHA. Imagine, all the great artists and designers in one place, showcasing great new products and samples. It's been something on my bucket-list for years now that I attend CHA and it probably won't happen, but to have one of my pieces THERE, is beyond exciting for me. Thank you, Thank you, Thank you, Eileen! I will always be grateful for you showing off my little creation. Happy New Year to everyone! Hope you are doing something crafty this weekend:)
Posted by Debbie K. at 5:37 PM 4 comments:

Can't believe my artwork was recently chosen for the cover of the Autumn 2013 issue of 'The Stampers' Sampler'! What a thrill, I tell you. It was kind of funny how it all happened....I had submitted this card MONTHS ago and then one day got an e-mail from Stampington to vote for cover art. When I first saw the two selected, I said to myself....'Hmmm...this kind of LOOKS like something I did, but then again someone else could have made something very similar.' That's when I decided to dig thru my scans of photos I always take before I send anything out. There it was. MY artwork. I was so excited and for WEEKS patiently awaited the verdict. Needless to say when it finally was posted, I was just thrilled. Last time I had artwork on the cover of their magazine was years ago and I shared it with two other artists. This time it's all mine:) I LOVE the PRIMA - Julie Nutting's doll stamps and was so happy to hear she came out with a second set of stamps. Now...if she only starts to make some male dolls to go with them;) Have a great week everyone and thanks for stopping by. BIG HUGS, Debbie Here's the link if you'd like to take a peek... http://stampington.com/publications/whats-new-coming-soon/The-Stampers-Sampler-Autumn-2013
Posted by Debbie K. at 7:28 AM 3 comments:

Today Eileen Hull posted the little baby shower centerpiece I sent her on the Sizzix blog. I thought I’d go into greater detail as to how I created it in case anyone wanted to try making their own. It’s such a neat box, and could be used for so many things! You can read more about it here: http://blog.sizzix.com/scoreboards-roundup-september/ 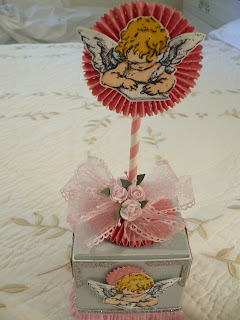 First I purchased a package of pre-cut mat board in colors from Hobby Lobby. They carry them in 12 x 12 sheets and that way I didn’t have to wait for paint to dry! (I love painting but time is such an issue for me these days.) For this particular one, I chose to use a seafoam green sheet, cutting out the two necessary pieces to assemble my box. (Note: The Sizzix box die is soooooo easy to cut and assemble and holds together nicely with redline tape.) From there I painted four small wooden balls with white acrylic paint, allowing them to dry. Next I applied crystal lacquer and set them aside to dry again. After that, I glued them to the bottom of each corner with a wonderful nontoxic glue called 'Liquid Fusion' (purchased, at JoAnn Fabrics.) To decorate the corners of the box, I used a corner die from ‘My Favorite Things’. It was only necessary to cut four corner pieces from the glitter paper as I trimmed each piec in half – width wise. Each glittered corner was adhered with the liquid fusion to each side of the box. For the bottom portion of the box, I cut a strip of crepe paper (I was too lazy to measure it, so just wrapped it around the box, allowing a bit of excess to be cut off later on.) I wanted the edge to be dainty looking so I trimmed it in half, then, folded it width wise and sewed along the edge. From there I adhered the trim to the bottom portion of the box with redline tape. Thin glittered ribbon purchased from Michaels (dollar bin) was attached with redline tape. I made the rosettes from Tim Holtz's die using BoBunny pink dotted paper and added the sweet stamped angel to the centers. The angel was colored with Copic markers before I attached small punched scalloped circles behind her. In case you are wondering, the little angel is from Stamp Camp and is called, 'Heavenly Scribe'. I think she's just adorable and can be used for several different occasions I mounted one of the rosettes to the back of a paper straw (Hobby Lobby carries a ton of colors!) then attached it to a base made of the same. A sweet bow was created with ribbon from Michaels and some mini roses and stamens, also from Michaels, adhered with the glue. Several glue dots securely held the rosettes to the sides and top of the box. (For this particular piece, four rosettes were attached to each side so it could be enjoyed from every angle at a table setting.) This little creation would be perfect for a small gift or a gift card. This project was so much fun to make. I think I’ll be making several more as we have lots of baby showers happening in the family soon. Thank you again, Eileen for sending me this great die. I’ve got my eye on a few others you just came out with, especially your little cradle. Have a good rest of the week everyone and thank you so much for stopping by! DebbieK
Posted by Debbie K. at 4:13 PM 1 comment:

Back in February of this year I won a Sizzix Bigz box die from Eileen Hull! (Can't believe how LUCKY I was!!!) My free time is very limited these days due to family obligations but finally I got some time to let my creative muse loose (an 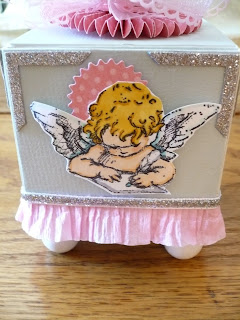 d boy was she HAPPY...lol)! My first instinct was to make a cute baby shower center piece with it. That meant a trip to Hobby Lobby where they sell pre-cut packages of matt board in colors. The box is soooooo easy to assemble and holds together nicely with redline tape. I started the project by painting four small wooden balls with white acrylic paint. Then I coated them with crystal lacquer and allowed them to dry. I glued them to the bottom of the box with a GREAT nontoxic glue called 'Liquid Fusion' (purchased, I believe at JoAnn Fabrics). To decorate the corners of the box, I used a corner die from My Favorite Things and cut them out from glitter paper, trimming each in half, width wise. I also used some crepe paper that I sewed and adhered to the bottom edge of the box with redline tape and adhered a thin glittered ribbon over the top edge of the crepe paper. I made the rosettes from Tim Holtz's die and added the sweet stamped angel to the centers. The angel was colored with Copic markers before I attached small punched scalloped circles behind her. In case you are wondering, the little angel is from Stamp Camp and is called, 'Heavenly Scribe'. I think she's just adorable and can be used for several different occasions! I mounted one of the rosettes to a paper straw (Hobby Lobby carries a ton of colors!) and attached it to a base made of the same. A bow I created with ribbon from Michaels and some mini roses were added to the base. Each rosette was attached to the box with glue dots. (For this piece, four rosettes were attached to each side so it could be enjoyed from every angle at a table setting.) This little creation would be perfect for a small gift or a gift card. I appologize for my TERRIBLE photography skills (I probably deserve a booby prize for my AWFUL picture taking). Just thought it was too cute not to share for those of you who are nice enough to stop by and see my doings;) Have a good weekend everyone!
Posted by Debbie K. at 3:12 PM 8 comments: